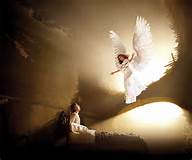 “Many people in life-threatening situations have been saved by angels’ intervention in accordance with those souls’ chosen paths.  However, if the dire circumstances are within the course of the souls’ chosen lifetimes, the angels cannot interfere.  When people are living in horrible situations or die violently, it doesn’t mean that angels are not with them during those extreme times, but rather that the angels must respect the souls’ chosen lessons which include those experiences.  These angelic emissaries of God provide spiritual comfort, enlightenment and gentle guidance within your pre-birth choices but they do not make decisions or give directions.  Even though they are closer to you insofar as knowing details of your actions, thoughts and problems, they are no more permitted to interfere in your free will choices than are your families here.

However, angels are permitted to relieve mental or emotional anguish so severe that the human mind can no longer function rationally.  This is not interference in those lives, it is within the province of compassion and sound judgment.  Such expressions as “losing control” or “being out of your mind” are correct in those times, because the angels are taking over during the lapses.  They provide the godly free zone between humans’ rational and irrational functioning.  If there were no angelic buffer between controlled behavior and desperation, or between miscalculation and its results, many physical lifetimes would be much shorter than the longevity clause in the pre-birth agreements.”