I was born in the depths of the Depression on January 19, 1935. My father and his five brothers were dirt-poor cotton sharecroppers living in tarpaper shacks in Marked Tree, Arkansas. Dad was also the deputy sheriff for Marked Tree. He was over six feet tall and commanded respect with his good looks and John Wayne swagger, a bigger-than-life natural-born leader who, with only a third-grade education, rose to be a construction superintendent. He was also a born-again redneck, with full-blown prejudice and rigid, Neanderthal thinking. His favorite newspaper was the National Enquirer. I both loved and hated him at the same time. My mother told me that although I was a full-term baby, I weighed only three and one-half pounds at birth, so tiny that I fi t into a shoebox. My dad, being a dominant male and a classic authoritarian personality, usually got his way except when it came to Mom’s precious and tiny shoebox baby. I was, of course, her favorite of four children. In 1939, the war got us off the farm and into the city of Memphis. Dad loved to tell the story of how he got a job in construction and was made a foreman within a few days.

We moved to Richland, Washington, in 1942, where Dad worked at
constructing the atomic bomb plant at Hanford. In addition to Mom and Dad, our family included my big brother, Joe, who was eight years older, my sister Nina, who was two years older, and my younger brother, Don, who was two years younger. Nina and I were always close. Maybe this was because we were born on the same day two years apart. Walter was not a good name for a kid, so Nina started calling me Bubby and later changed it to Buddy, a name that my family has used all my life.
An important event of this period was meeting the incredible woman who was both my third and fourth-grade teacher. The fact that I had her for two years must have been a play of the divine. She was a miracle worker who took a shy and insecure little boy and made him the star of her class. I loved her dearly. I remember being intensely jealous when a man came to get car keys from her and I found out he was her husband. 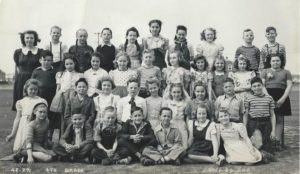 I am second from the left in the second row from the bottom.

I reached my magical fifteenth birthday while living in Amarillo, Texas. This was a time of happy memories and a glimpse of the spiritual connection that was coming. The first glimpse of my future life began with my salvation. One of the men who worked for my dad was Guy Barnes. Guy was just about the nicest person you could ever meet. I really liked Guy, but the main attraction for me was his beautiful wife. Every time I was near her, I felt funny inside. I never knew her real name; I just called her Mrs. Guy Barnes. She and her husband were both members of our church, and I loved going because she would be there. She also hosted the Young People Christian Group of which I was an enthusiastic member. One warm spring night, we were meeting at her house when she asked me if I wanted to go sit on the porch with her. My thought was Gee, golly, yes! After we sat down, she took my hand and asked in the sweetest voice, “Walter, would you like to accept Jesus as your personal savior?” She could have substituted the devil for Jesus, and I would have said yes. Still holding my hand, she took me inside and shouted, “Hallelujah, Walter has just accepted Jesus as his personal savior!” Enthusiastic well-wishers who hugged me and patted me on the back suddenly surrounded me. More importantly, I received the personal attention of Mrs. Guy Barnes for the rest of that magical evening. I surely did love Jesus for that! I experienced my first spiritual high during this time in Amarillo. I had spent most of a Saturday with a bunch of guys going house-to-house setting up appointments for a local photographer to take family pictures. The whole bunch of us was now in a movie theater, waiting for the start of a war movie called Retreat Hell, starring Frank Lovejoy. I suddenly felt wonderfully alive and energetic; my body felt as if it was glowing.

During this period, I spent hours in my backyard leaning up against the house stargazing. Although I did not know it then, I now believe I was longing for home. I never liked school, mainly because I was not a good student. So how did I get to be a college professor? My tenth-grade history teacher planted the first seed toward that accomplishment. She loved teaching and often invited students to her house, which was conveniently located across the street from the high school. Nonetheless, she was a demanding and challenging teacher. One of her tricks was to ask questions about little-known facts or events in history. You had to read the footnotes, index, or fine print in our textbook if you wanted to answer these trivia
questions. Because I liked her, I played this game with her and diligently looked for these little tidbits of history. I remember the rush I experienced when I was the only student in the class who knew the answer to the question “What was the XYZ Affair?” Because we moved before the end of the school year, I had to get her signature for my withdrawal slip. After she signed my slip, with a sincere look and voice she told me that I was a very intelligent young man and that I was capable of doing anything I wanted. I would not understand the full truth of that statement until much later in my
life. I hope someday in the spirit realm to thank this wonderful human angel for planting this first seed.

Greenfield, Indiana, was home to the Hoosier poet James Whitcomb
Riley. It was wonderful small town forty miles west of Indianapolis on Route 40. Riley Park, which had a creek shallow enough that you could drive your car through, was one of my favorite places. There are so many great memories surrounding my two and a half years in Greenfield: my first car, my first girlfriend, my first sex, my first
prom, and the first in my family to graduate from high school.
Okay, you want to know about the sex!
Shelby Jean, my first real girlfriend, and I held hands in the back seat of the preacher’s new Chevy as we rode home from Indianapolis after my baptism. The ride back to Greenfield took most of an hour; I wished it could have lasted longer, because I had never been so happy. Our small church did not have its own baptism facilities, so we had driven to Indianapolis to a large church that had a baptism pool. My salvation had happened the week before during the altar call at the Wednesday night service. The preacher had given his best high-spirited, hellfire-and-damnation sermon, the choir was singing, “Jesus is softly and tenderly calling,” and Shelby Jean whispered in my ear, “Jesus wants you, Walter.” Looking right at me the preacher is pleading, “Come forward and be washed in the blood of Jesus
Christ.” With the help of an insistent tug on my arm by Shelby Jean,
forward I came. “Hallelujah, praise the Lord, he is saved!” came the shouts from the congregation as enthusiastic well-wishers quickly surrounded me.  Do you get the strange feeling this has happened before? The glow that I got from being the center of so much loving attention lasted for days. The especially sweet kiss I got from Shelby Jean after walking her home that night is a memory I will always treasure. I was a junior, and Shelby Jean was one grade behind me at Greenfield High School. I thought she looked like the movie star Esther Williams, with her upturned auburn hair, freckled oval face, and full kissable lips. After my salvation, our relationship became
a paradox. On most Saturday nights, after a movie or hanging out at the drive-in restaurant, we would look for a place to make out. I was one of only three students in high school who owned a car, a snazzy 1942 Ford coupe.  I bought this car with $300 of my own money I had saved since I’d begun working at age twelve as a shoeshine boy (among other things). Okay, so I am bragging a little, but I was proud of that car! 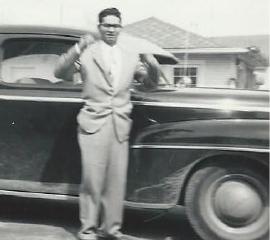 My snazzy 1942 Ford coupe
The unwritten rule in those days was nothing below the waist. This was before condoms were easily accessible, and if you were fortunate to have acquired one, it had usually aged in your wallet so long it was useless. After some heavy petting, we ended up dry humping on the front seat. This amorous exchange ended with Shelby Jean crying and both of us feeling disgusted and guilty. We made solemn vows that this would not happen again, but of course it always did! Although our relationship lasted less than a year, it was the catalyst for a lifetime of exploring the wondrous phenomenon of romantic love. (See appendix B for my portrayal of “Romantic Love Is a Sex-Driven Ego Trip.”)
My mother was determined that one of her four children would finish high school. For this reason, she refused to leave Greenfield until I graduated. I had already attended over a dozen different schools as we traveled around the country from job to job, and she sensed another move would be too much. I did graduate, barely, forty-ninth in a class of fifty-two, a modest beginning indeed, for a young man who would eventually become a successful college professor!

Without really understanding why, I decided to join the navy. Mom was devastated; she did not want to let go of her favorite little
shoebox baby.  After I left, she went into a deep depression. I needed divine intervention to pass my physical because it would eventually become clear (pun intended) that I was born with a hearing deficiency. I remember someone whispering numbers at me with his hand over his mouth while I guessed the right numbers without hearing them. Boot camp was a shock as I learned quickly there were twenty-four hours in each day! In high school, I took typing because it was easy and taught by a cute young teacher. I passed the course with the minimum of thirty-five words per minute. During the first week of boot camp, the battalion commander asked approximately two hundred fifty recruits if anyone could type. After a pause, I raised my hand and became the battalion clerk. This new status excused me from all but “must-one” classes and activities. This included marching that I was already having difficulty with because of not being able to hear the commands. With the extra free time, I could keep my locker and gear in exceptional shape, which resulted in my recognition as an outstanding recruit. After boot camp, I went to school in Oxnard, California, for a six-month training to be a steelworker in the Seabees (the official name is Mobile Construction Battalion). You may remember a movie called The Fighting Seabees starring John Wayne. The most amazing thing about my experience at Seabee school was that I did so well.