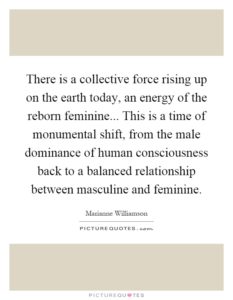 “Male energy is harsh, often productive by ruthless means, always needing to prove a point or achieve success in a venture. Female energy is gentle, yet with greater, quiet strength as its foundation. Interconnectedness, which is the ultimate in conscious achievement, is female energy.”

“Matthew, Tell Me about Heaven,” P. 64, A Matthew Book with Suzanne Ward